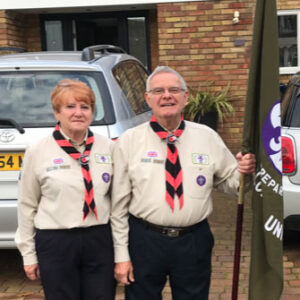 Liz and Les Glindon, members of MFTM have been Scout leaders for nearly 50 years!  They recall with sheer joy all the various trips and adventures they have been involved with.

Liz recalls a little story they both have fond and amusing memories of;

At the very beginning of their training they were required to attend 3 weekends for their assessment.  On the last weekend one of the leaders who was 21 arrived with beer and wine, a definite ‘no-no’ back in the day.  When all the training team had left after a full day of activities and about 10pm the drinks came out and the leaders began to unwind and celebrate.  In the early hours of the next morning the group were hungry, but the kitchen was locked.  However, someone spotted a serving hatch and as Liz was the smallest she was speedily helped through the tiny gap where she proceeded to make bacon sandwiches for everyone! 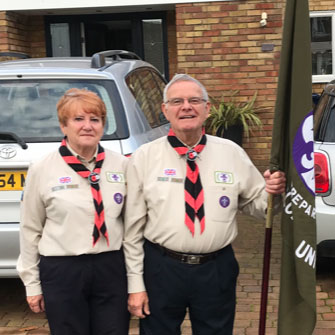 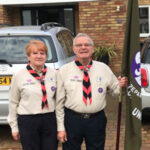 At breakfast that same morning it was Liz’s job to serve for all the returning training members as well as the leaders.  Each leader declined the offer of bacon from Liz, but all the trainees accepted until suddenly she was called before her ‘superiors’ and asked what was going on.  Liz confesses that she isn’t very quick to think of a plausible story when put on the spot, so she had to own up to what had happened the night before and said that they had eaten all the bacon.! The positive from the story is that she was at least rewarded for her honesty.

Liz fondly states that the lesson she learned from that event is that she can now almost read what the young people they are caring for are going to get up to.  Despite their puzzled looks she often advises them with comments such as “I wouldn’t do that if I were you” before they have even done anything!  She questions whether it is because she is a Mum, a long-standing leader, intuition or simply that she’s ‘been there, done that and got the tee shirt’ herself.

Would they change anything they’ve done over the past half century?  Absolutely not!

For nearly 50 years Liz and Les have given unreservedly to the scout movement.  Since they started, they have been to weddings and christenings of some of their past scouts and are continuously writing references for them.  They both see themselves as very lucky.

The people in the music session I joined were so friendly.