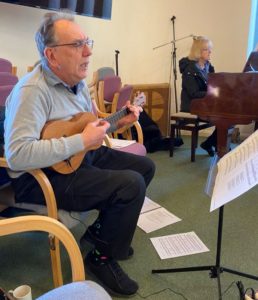 I have always been interested in music since an early age when in the 1960s, I tried (using the word loosely) to play the violin.

I have always been interested in music since an early age when in the 1960s, I tried (using the word loosely) to play the violin. Well, to be honest, the only tune I could play and recognise was “Twinkle, Twinkle, Little Star”. However, ironically, I did make it into the school orchestra…. How I did that I’ll never know; I think they were short of numbers!!

In the 1970s I tried the cornet/trumpet. This was a little more successful as I progressed to the local town band, eventually playing the principal cornet. Then, in the 1980s, I tried out the guitar to encourage music in the church I attended and helped with my involvement in the Sunday school and its singing. When moving to Catsfield 28 years ago, I helped set up a music group in St Lawrence church, again also involved in the Sunday school work. However, due to age and the group’s illness, our music group disbanded. In 2019 my wife and I had a great cruise adventure down to the Caribbean, and on the cruise was a chance to learn the Ukulele, so I did, and on my return, my wife brought me a Uke. So off to evening class I went to learn this instrument. Later, I joined one or two Uke groups in the area and my playing improved, (well, I thought so). It was also a great chance to sing many of the old songs from years past. I must admit a lot of those songs I either knew the chorus, or the odd line or two and la la la…. The rest.

Then along came an advert in the local paper, for anyone interested in singing to help with MFTM. Well, I couldn’t resist, as 2 weeks earlier I’d retired from 49 years with one company in retail. What a great use of some of my now, spare time. Since joining the group in Battle, it’s been great to be involved, and on the last session I attended, I took along my Uke. Double whammy!! I look forward to sharing with you all every other Monday (for now).

What a way to link Me & Music together – sharing it with others.

Music for the Memory is a delight because they are always trying new ways to take people living with dementia and their carers to their happy place.